A milestone of the Czech New Wave, Milos Forman’s first color film The Firemen’s Ball (Hori, ma panenko) is both a dazzling comedy and a provocative political satire. A hilarious saga of good intentions confounded, the story chronicles a firemen’s ball where nothing goes right—from a beauty pageant whose reluctant participants embarrass the organizers to a lottery from which nearly all the prizes are pilfered. Presumed to be a commentary on the floundering Czech leadership, the film was “banned forever” in Czechoslovakia following the Russian invasion and prompted Forman’s move to America.

The film is an excursion into the Czech petit-bourgeois relationships with their short lasting friendships, empty heads, “long” fingers, and no conscience whatsoever. All of these characteristics are portrayed against the background of a firemen’s ball. The director Miloš Forman and his cinematographer Miroslav Ondříček are truly merciless in their caricature of the Czech national character. The comedy soon becomes a tragic farce. Great attention is paid to details, gestures and dialogues. 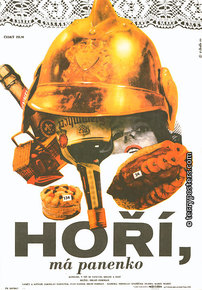