Grandiose, catastrophic, gorgeous, schizophrenic - these and many other attributes have been used over the last thirty years to characterise Martin Scorsese's tribute to the Hollywood musicals of MGM studios. After the success of Taxi Driver, the most conversant of the New Hollywood “movie brats” took a tangent into the artificial world of the optimistic, romantic realism made famous by Vincent Minnelli and George Cukor. It was however “infected” by the modern view of romance and by an intense type of acting using frequent improvisation in the style of John Cassavetes. The brilliant Robert De Niro and Liza Minnelli portray a pair of artists whose stormy love affair is complicated not only by their different natures, but primarily by the different success that each of them has in materialising their artistic ambitions (as in, for example, Cukor’s A Star Is Born). When taken together with Coppola’s Apocalypse Now and Cimino’s Heaven’s Gate, Scorsese’s sweeping experiment, vindicated after many years, completes a trio of brilliantly unhinged films that definitively shattered the patience of the studio bosses and brought the era of New Hollywood to its end. 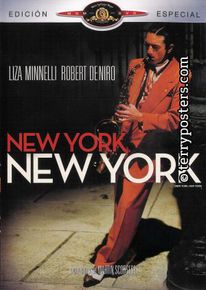