The invincible agent Cyril Juan Borguette alias W4C (Jan Kacer) has been assigned a mission to go to a hotel in Prague, get hold of a saltcellar with a plan for the military exploitation of Venus hidden in it, and hand it over to the beautiful agent Alice (Kveta Fialová). He will have to compete for the saltcellar with other agents working for the world's various greater and smaller powers. The head of the Prague counter-intelligence unit gets news of agent W4C's mission. Deficient in personnel, he nominates accountant Foustka (Jirí Sovák) as agent 13B. Mr Foustka takes his dog Pajda with him and the two head for the airport. Pajda helps him track down agent W4C in a classy hotel that becomes the battleground for the interests and plans of the secret agents from different countries, each trying to get hold of the precious saltcellar. 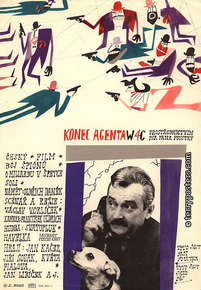