With raw authenticity, the director records the luckless fate of René over a period of twenty years as he yo-yos between prison and freedom. The life of René, who successfully stylizes himself in the role of a desperado, unfolds against a backdrop of important political events occurring in the CR and beyond its borders. The Velvet Revolution, the presidential election, 9/11 and the Czech Republic’s accession to the EU. All this is “digested” by René mostly from the confines of various prisons. The film also traces the director’s intriguing relationship with her “subject of study”, who sometimes feels like a prostitute selling his life story for filthy lucre, but for whom the visits from the film crew or his countless letters to Helena Třeštíková are often his only solace. 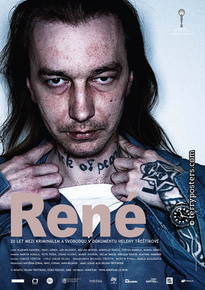