From the director and star of "Amelie" (Jean-Pierre Jeunet and Audrey Tautou) comes a very different love story, "A Very Long Engagement," based on the acclaimed novel by Sebastien Japrisot. The film is set in France near the end of World War I in the deadly trenches of the Somme, in the gilded Parisian halls of power, and in the modest home of an indomitable provincial girl. It tells the story of this young woman's relentless, moving and sometimes comic search for her fiancée, who has disappeared. He is one of five French soldiers believed to have been court-martialed under mysterious circumstances and pushed out of an allied trench into an almost-certain death in no-man's land. What follows is an investigation into the arbitrary nature of secrecy, the absurdity of war, and the enduring passion, intuition and tenacity of the human heart. 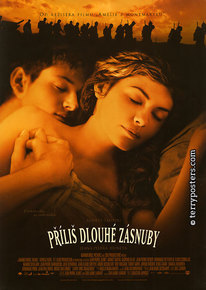