When Father Was Away on Business 0+

Kusturica's second feature film tells the story, through the eyes of a small boy, of a family affected by the communist change in 1948 Yugoslavia. Tito stopped following Stalin and the whole country was swept by political purges which also affected a number of communists, one of them being the protagonist's father. The film is full of mild absurd humor and a fatalist life philosophy, which says that every single person bears his/her guilt but only a few people bear mercy. 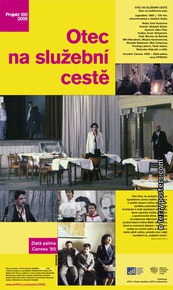