William Munny (Eastwood) is a widower with two young children. He was once a very vicious gunfighter, but after marrying, gave up gunfighting, drinking, and most other vices. His wife died of smallpox in 1878, but he continues to try to eke out a living with his children on their hog farm, and to try to be the kind of man he believes his late wife would want him to be. It is now 1880. 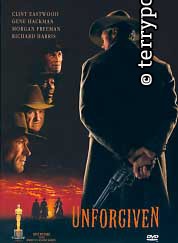