After a thirteen-year lull Leos Carax, the enfant terrible of French film, is triumphally back. In a film that many had tipped for this year’s Palme d’Or at Cannes, the director’s faithful partner Denis Lavant embodies the mysterious Monsieur Oscar, who in the course of a single day assumes a whole range of identities in a disturbing “performance” in front of invisible cameras. “What makes you carry on?” asks his boss, played by Michel Piccoli. “The beauty of the act,” replies Lavant’s chameleonesque hero in what could be a paraphrase of Carax’s own creative creed, which he has shared with us in a mere five films over nearly thirty years. His characteristically anguished romantic vision is combined with a provocative playfulness and a veneration of some of the more bizarre milestones of cinema (among them Georges Franju’s Les yeux sans visage). Woven into this bewitching spectacle is a love of Paris (watching helplessly as the legendary Samaritaine department store goes into terminal decline), the vanishing world of the limousine, and the songs of Kylie Minogue. 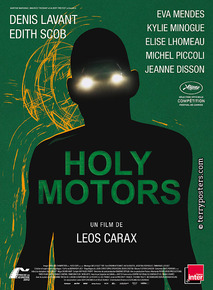