A Pigeon Sat on a Branch Reflecting on Existence 0+

This is the third and final part of Roy Andersson’s trilogy ‘on being a human being’, in which he captures the contradictory and dynamic nature of existence. He suggests the idea that the path we are taking towards the Apocolypse is still within our realm of control. Andersson is the Swedish master of comic absurdity and has brought humor into such concepts as death, ageing, debt, and unrequited love. His approach has surprised, moved and deeply impressed the jury at the Venice Film Festival and he was presented the Golden Lion, the top award. 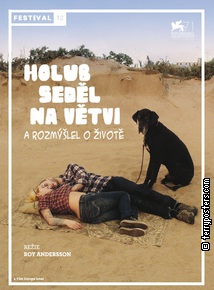